As we celebrate women in waste (and recycling!), The Recycle Smart MA team is thrilled to share this inspiring article written by Sofie Green, Maureen Hennessy, and Bethiah Peirce. These three young women are all 8th graders in Medford and part of the Medford Girl Scout Troop 68137. 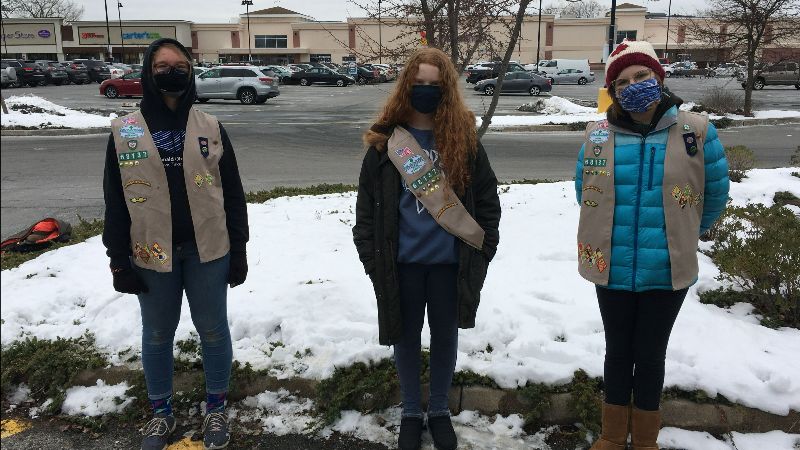 The Silver Award is the second highest award a Girl Scout can earn. To earn the award, groups of up to four girls are required to come up with a project that benefits the community and educates people. Then each girl must spend 50 hours working their project, whether it be speaking to other Girl Scouts, teaching people about issues, or even things like writing this newsletter article. The issue that our group decided to focus on is plastic pollution and recycling. We noticed that we often see trash and plastic around the City of Medford and we wanted to help our community to recycle properly.  After doing some research we discovered that the best way to help our city with trash is to help with recycling, specifically educating other Girl Scouts on what is recyclable and what needs to be thrown away.

As a part of our project, we lead a workshop for younger Girl Scouts to teach them how to recycle, and about the issues with the current recycling system. We start with a short presentation sharing some facts about plastic and recycling. Then we lead the girls in a game we created called “Recyclable or Not?” The game explains what common household items are recyclable, and which ones aren’t. We focus on this because people often recycle the wrong items which cause extra sorting for recycling workers, increase the costs, and can ruin the good recyclables in the load. Sometimes people also recycle things that are recyclable in theory (because they are made of plastic or glass) but they don’t realize that the items are actually too small or the wrong shape for the recycling machines.

To play the game, each of us holds up a common object and asks the participants to give us a thumbs up or thumbs down based on whether or not they think the item is recyclable. We then explain if it is, or isn’t, and why that is. For instance, a square, Chinese-food, takeout container is not recyclable because it is made of plastic-coated cardboard. This means it is made of cardboard that is so strongly fused with plastic that it is impossible to separate the plastic and the cardboard and, therefore, it is impossible to recycle. However, people often recycle containers like this because they think that it is cardboard so they think it must be recyclable. The game gets the kids thinking about what they are putting in the recycling. They can also begin to recognize other plastic-coated items and know not to recycle those either.

Throughout the entire presentation, we make a point to emphasize important facts we want them to remember. One of these is the fact that you can’t recycle plastic bags in your household recycling bin. Stretchy sheet plastic is really bad for the machines used to sort the recycling and is an item that is a common contaminant. We encourage people to put their recyclables loose in the recycling bin, and bring their plastic bags back to a grocery store or center that specifically collects these “film plastics” for recycling.

The goal of our game is to give Girl Scouts more insight into the world of recycling and recyclable items and we hope that our game and our presentation are our small part in slowly reducing the amount of plastic in the world. We are counting on the fact that young kids tend to like to boast about what they know, and will therefore spread the information even farther. We hope that even though we are speaking to just a few people who probably won’t remember much of what we said, we might light a small spark in the heads of just a handful of these children, and that they will go on to do their part in stopping the spread of pollution.

We have done eleven workshops so far for girls from Kindergarten to 5th grade in Medford, Arlington, and Wakefield, and most of them have gone pretty well. A lot of girls have told us what they put in their recycling and how they reuse things, such as making a rain stick out of a toilet paper roll. Some girls ask why certain objects can’t be recycled (such as black plastic) or why you have to clean out your containers before you can put them in the recycling. Younger girls are surprised to learn that glass and aluminum can be melted down many times and can be turned back into glass and aluminum over and over again. Older girls are more interested in learning the details about what can, and can’t, be recycled. The younger girls are much more playful in our workshop and like to play the game and tell us what they learned. The older girls are much less animated, but they pay more attention and share more detailed facts about what they learned.

As we start to wrap up the workshop, we tell the girls about our “I pledge to Recycle Smart” badge. We ask the girls to make the Girl Scout sign (which is holding up their three middle fingers on their right hand), then each of us says a line of the pledge and the girls repeat it. We then applaud them and explain that they earned the badge and that they will get it from their troop leaders, or in the mail.

In the end, we hope to help make a difference in the world and inspire others to do the same. Pollution, and especially plastic pollution, is a huge problem and we hope that through educating younger Girl Scouts, we can begin to slow and reduce the pollution in the environment.

In honor of Women’s History month, the Recycle Smart Team decided to mix up the Partner Spotlight format and feature three women who inspire us every day on our reduce/reuse/recycle journey. There are many more amazing women working in the Massachusetts recycling world that we haven’t called out by name here. We raise our glasses to each and every one of you. 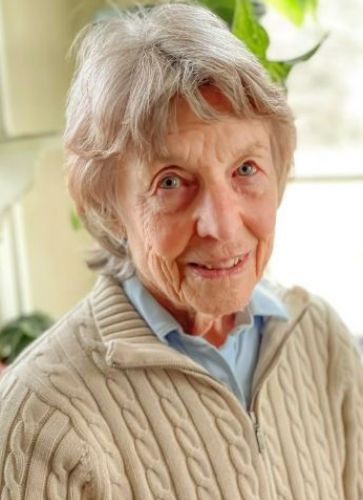 Gretel Clark is a warrior for a less wasteful world and there’s nowhere that’s more evident than in her hometown of more than 40 years, Hamilton, MA.  For the past 2 decades, Gretel has led ground-breaking initiatives to get Hamilton residents to recycle and compost all they can. In 2007, under Gretel’s leadership, the Board of Selectmen limited trash to one barrel per week per household (with unlimited recycling and special “overflow trash bags” available for purchase at $1.75).  In 2009, Gretel organized a pilot curbside food waste collection program.  In 2012, it became Massachusetts’ first town-wide food waste collection program, with a state grant paying for the 13 gallon “organics containers” distributed to residents. Thanks to Gretel’s work, Hamilton’s waste decreased a whopping 60% between 2006 and 2013!  But Gretel wasn’t finished. Last month, her latest act captured a Boston Globe headline – First Mass Town to Mandate Composting – as Hamilton’s voluntary food waste collection program became a requirement that residents separate food waste for composting. Gretel’s typically modest response to the fanfare is “I didn’t do this alone; a lot of credit goes to my dedicated Waste Reduction volunteers, Hamilton’s selectboard, and our DPW Director”.  She also commented:  “The best thing about this is it’s given so many municipalities courage to think positively about doing something to really get food waste out of the trash stream.” Hats off to Gretel. What will she turn her attention to next? 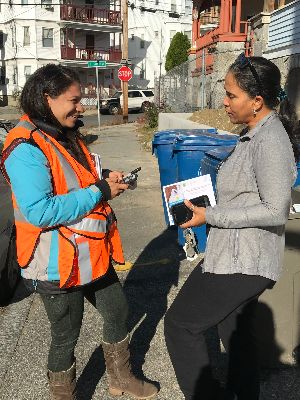 Lorena Salazar’s family values, studies in Sustainable Design, and love for nature and sustainability are what originally drove her to the recycling field five years ago. The Recycle Smart MA team came to know Lorena, when she implemented the Recycling IQ Kit in the City of Lawrence in 2019.  Lorena coordinated a team that went out on recycling day to inspect resident’s recycling containers.  They left “oops tags” when they found problem materials, and – most importantly –  spoke with residents and explained the whys and hows of smart recycling. We were impressed by Lorena’s thoughtful outreach strategies and her seemingly effortless ability to engage with residents. Pictured here you can see Lorena (left) working to educate a Lawrence resident about proper recycling.  Lorena’s neighbor-to-neighbor work succeeded in improving the quality of the City’s recycling and raising awareness of what does and doesn’t go in the recycling bin.  For the past year, Lorena has provided customer service support for a local hauler and recycling processor, JRM, of Peabody, MA.  “Besides having a sense of purpose in what I do, I have had the opportunity to meet a lot of very interesting people.  Collaborating with them has made this a very rich and fun experience,” Lorena recently shared with us. 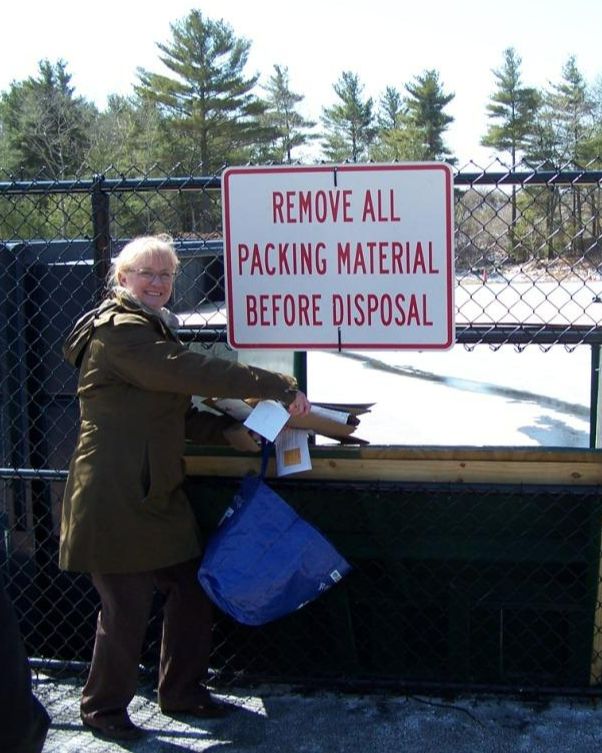 Claire Galkowski has been dedicated to waste prevention and recycling since the early 1990’s after an “epiphany” stemming from an Earth Day publication distributed outside the public library showing the collective impacts of our water use, electricity use, heating, traveling and material consumption. “As a lifelong, innate ‘waste-hater’, parenthood sparked my concern about our culture’s unsustainable consumption and waste impacts on my children’s future” Claire told the Recycle Smart Team. “I started bringing recyclables home on the train from the microbiology lab at MIT, where I worked, and took them to the monthly drop-off in Roslindale.” Shortly after, Claire joined the volunteer team who ran the Roslindale recycling drop off and started (successfully) advocating for city-wide curbside recycling in Boston. Three years of volunteer work, conference attendance, and independent study led to a position as Boston’s Recycling Block Captain Coordinator.  In 1998, Claire was hired for her dream job by the newly formed South Shore Recycling Cooperative (SSRC), a 13-town consortium of solid waste managers. Twenty-two years later, SSRC is still going strong under Claire’s leadership and the cooperative has grown to encompass 17 towns. Claire also served on the Board of MassRecycle for ten years and was President from 2005-2007.  She currently serves on the Massachusetts Product Stewardship Council and the Westwood Environmental Action Committee.