Can you feel the love?

There’s a lot to love about aluminum cans, and not just because they contain some of our favorite beverages. The pandemic spiked a huge demand for aluminum cans as Americans bought record amounts of canned beverages to consume at home while local bars and restaurants were forced to close their doors. In this issue, we’ll take a deep dive into the process behind the creation of the aluminum can and why it’s so important to recycle them.

Aluminum is produced through a complex process that starts with mining bauxite ore from the earth. Most bauxite used in the U.S. today is mined in Australia, Africa, South America and the Caribbean in open-pit mines so large they can be seen from space. Next, aluminum oxide is extracted from bauxite through an energy intensive, 4-step process that involves heating, washing, and drying the mineral. This results in a fine white powder known as alumina, but the process isn’t done yet. The final step is smelting the alumina by dissolving it in molten cryolite at 1,000 degrees Fahrenheit to produce what’s known as primary aluminum. Creating aluminum from raw materials spans continents and requires vast amounts of energy.

That’s one of the reasons why recycling aluminum is such a win for the environment. Making new aluminum cans out of recycled aluminum cans requires 92% less energy than making them from virgin (primary) aluminum. Less energy usage means lower greenhouse gas emissions. But that’s only part of the story of the humble aluminum can.

Why is aluminum such a desirable package? For starters, it protects the contents from light and oxygen. Aluminum is lightweight and cans are easily stacked, making storage and shipping more efficient. Less weight reduces fuel used in transportation, lowering greenhouse gas emissions. More recently, public awareness of the impact of plastics on the global environment has spurred many companies to turn away from plastic, which is inherently harder and more costly to recycle. A recent survey of U.S. consumers reported 84 percent as saying they expect products and packages to be easy to recycle and made with recycled content, while another survey showed 60 percent of consumers said they want non-plastic packaging options.

ReMade in the U.S.A.

Here’s what else to love about aluminum:

It’s infinitely recyclable: Aluminum (and all metals) can be recycled over and over again because they don’t lose structural integrity the way paper and plastic do. Most recycled cans are turned back into new cans in a continuous, renewable loop. A recycled aluminum can typically goes from the recycling bin to the grocery store shelf as a new can in about 60 days. The average aluminum can contains 50% post-consumer scrap (old cans), 23% post-industrial scrap (scrap generated during the manufacturing process), and 27% primary aluminum. Recycling more cans generates a greater supply of post-consumer aluminum to make higher recycled-content containers, reducing the need for the energy-intensive process of creating new aluminum. 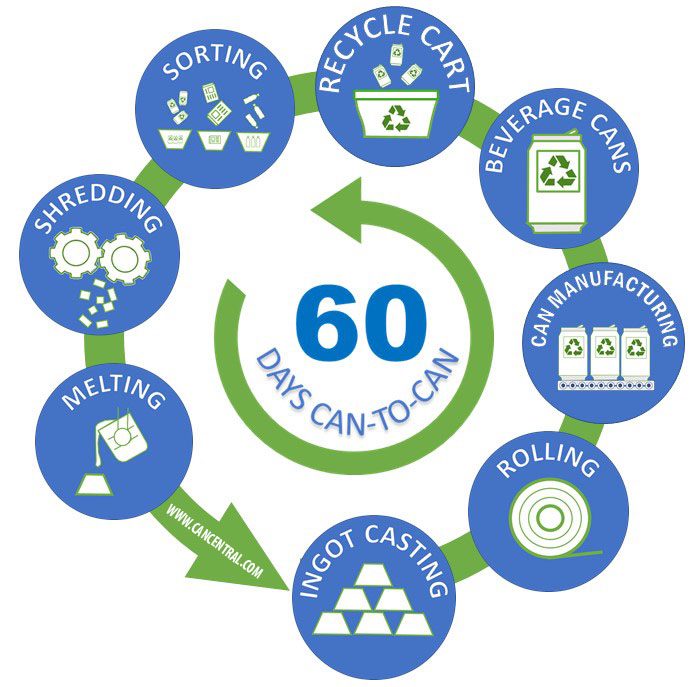 In 2016, the consumer recycling rate for aluminum cans in the U.S.fell below 50% for the first time in years. Unfortunately, it hasn’t cleared the 50% recycling rate since then. To put it another way, 50 billion cans—more than $810 million worth of aluminum – were sent to landfills and incinerators instead of recycling bins in 2019, across the U.S. Bay Staters recycle more than the national average thanks to the incentive provided by the nickel deposit on soda, beer and sparkling water. In fact, the aluminum industry reports that “while the recycling rate for aluminum cans is about 35 percent in states without container deposit laws, rates average more than 75 percent in the 10 states with these programs”. However, our deposit law excludes energy drinks, hard seltzer, hard cider, and wine (these single serve beverages didn’t exist when the deposit law was enacted in 1983).

If we recycled 100 percent of our aluminum cans, we would save enough energy to power 4.1 million homes for a full year. So, the next time you notice an aluminum can in the trash or on the side of the road, do the planet a favor and put it where it belongs: in the recycling bin. And if it’s a deposit container, redeem it and get your nickel back!

The Right Way to Recycle Your Cans: 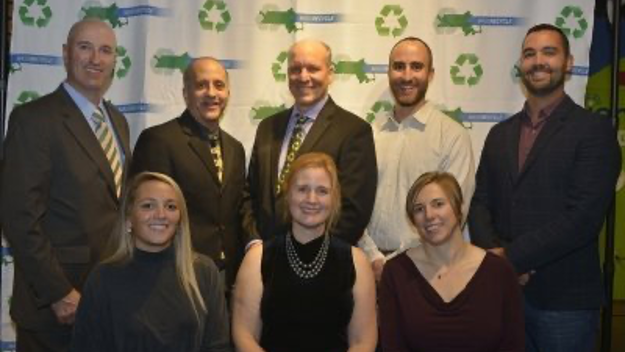 📷: MassRecycle Board Members at the 2019 Fall Social

If you’re finding it hard to keep up with the solid waste and recycling world, you’re not alone! That’s why Recycle Smart Partner, MassRecycle, is taking steps towards improving communication and providing better information on recycling and waste reduction for municipal recycling coordinators, businesses, colleges and universities and residents across the Commonwealth.

MassRecycle is a non-profit focused on education, networking, and advocacy. Their website highlights upcoming events and vital resources, including an entire page dedicated to Recycle Smart! On top of that, they provide webinars and podcasts that dig deep into specific trash and recycling topics. “We believe in sharing all the details,” said Gretchen Carey, MassRecycle President, “because they truly make the difference between success and failure.”

MassRecycle and its MassProduct Stewardship Council is currently advocating for Extended Producer Responsibility (EPR) legislation – this will incentivize manufacturers to provide sustainable end-of-life disposal options, improving recyclability in everyday products. If you’re interested in learning more, check out their Get Involved page; or follow them on Facebook, Twitter, Instagram, and LinkedIn. Keep up the great work, MassRecycle!

Why can’t we recycle everything?

What REALLY Happens to Your Recycling?