Is your recycling going to waste?

While recent news stories about recycling might have you believe otherwise, the answer is an emphatic no, recycling is not a wasted effort. The cans, bottles and paper you put in your recycling bin are part of an important supply chain that returns used materials to the manufacturing sector to make new products and packaging in the U.S. and overseas.

But what you put in your recycling bin does matter, now more than ever.  In 2018, the Chinese government imposed a ban on the import of most recycled paper and unsorted plastics from the U.S. and Europe.  Known as “National Sword”, the ban was a wake-up call to the recycling industry. For the previous 2 decades, almost half the recyclables collected in the U.S. were sold to mills in China where they were converted into packaging for the myriad consumer goods that China exports to the U.S. each year. The Chinese recycling mills accepted low quality material and using cheap labor, sorted out the good from the bad.  Until they decided they’d had enough.

National Sword caused a global disruption in the secondary materials market. The oversupply of scrap paper and plastic caused their value to plummet.  Markets in Southeast Asia stepped in to buy at low prices, while demanding higher quality, cleaner material.

And that’s where each of us comes in. Despite the complex system of screens, scanners, jets and magnets used to sort our recyclables at the recycling facility – non-recyclable items inevitably slip through. Recycling facilities just cannot meet the new standard for cleaner material without our help.

Over the years, many of us became “wishful recyclers”, putting items in the recycling bin that we hoped would be recycled. Our recycling habits became a little sloppy. And quite frankly, most of us simply didn’t know there was a problem.

The most common mistakes 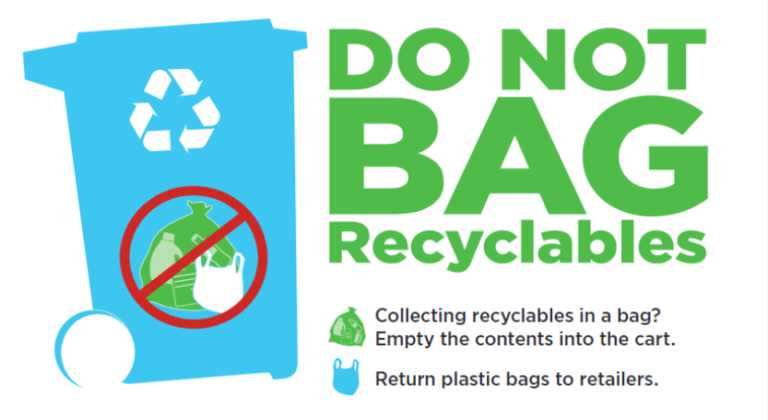 We asked the operators of Massachusetts’ Material Recovery Facilities (MRF)  – where household recyclables are sorted into separate streams before they’re sold to end-markets – what the biggest problem materials are.  Top of the list is plastic grocery bags. That’s right – even though most plastic bags display a recycling symbol, they do NOT belong in your household recycling bin.  Why not? Plastic bags wreak havoc at MRFs where they wrap around sorting equipment and shut down the sorting line. Workers have to manually cut the bags off the equipment, a dangerous and time-consuming job. This happens multiple times a day at the recycling facility.

The other worst offenders?  Recyclables in plastic bags (these are pulled from the sorting line and thrown away); food and liquids, clothing, and “tanglers” such as wire, garden hoses, rope, and string lights. None of these items belong in your recycling bin.

Become a smarter recycler by following these guidelines: 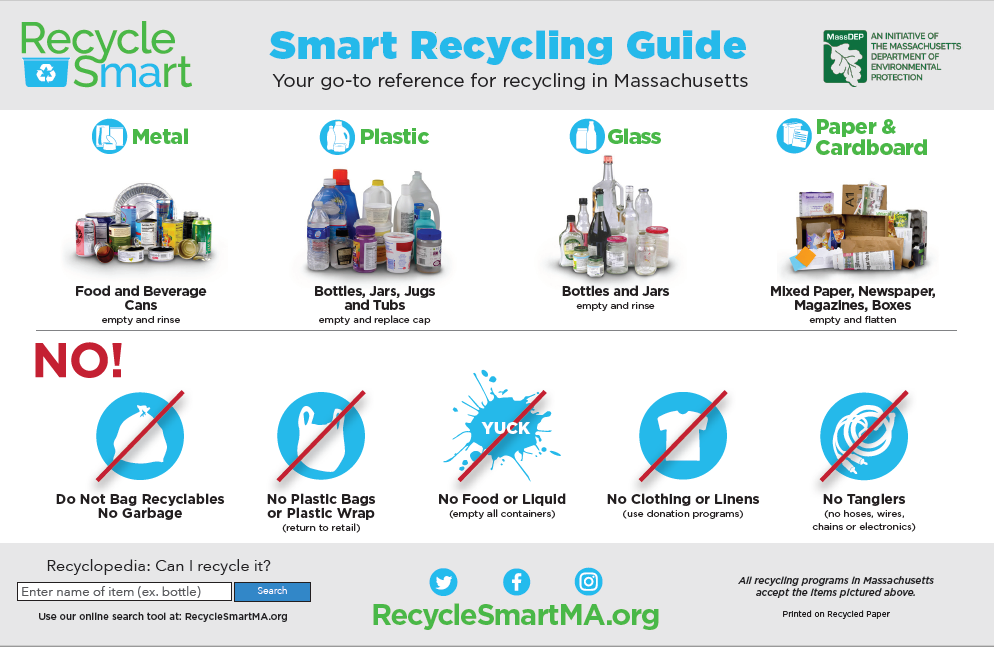 The Smart Recycling Guide is your go-to reference for recycling in Massachusetts. You can download it in English, Spanish, or Portuguese versions of the guide here.

Keeping the bad stuff out of our recycling bins means the good stuff gets recycled.  It also ensures we’re supporting a supply chain of recycled materials for the manufacturing economy, while conserving resources and protecting our environment.  The silver lining to National Sword is that for the first time in decades, major investments in U.S. recycling mills are being made to fill the void that China left.  That means jobs and economic growth right here at home. All the more reason to feel good about recycling. 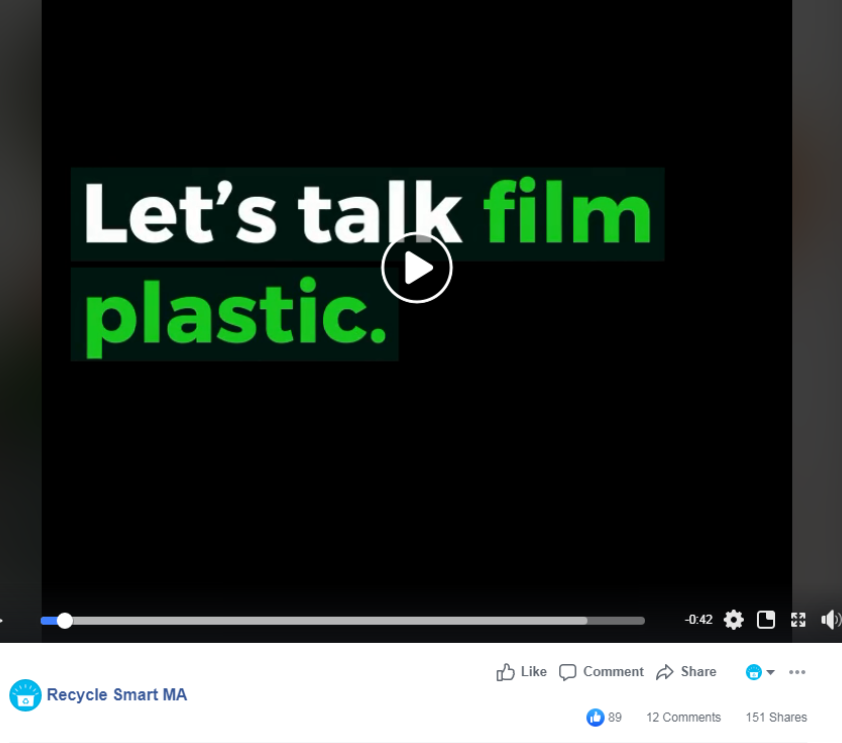 Check out (and share) this short video about film plastic

Over 120 cities and towns across Massachusetts have passed plastic bag bans – yet we are still bombarded with “flexible film plastic.” According to a recent blog post from our friends at The Recycling Partnership –  “even if we take plastic bags out of the mix, the data suggests we’d still have more than 3 billion lbs. of film on our hands each year (or roughly 25 lbs. of film in every household).”

While this film plastic does not belong in your recycling bin – it can be recycled at most supermarkets.

So what is “film plastic”? Film plastic is thin, flexible sheet plastic. This includes items like bread bags, produce bags, plastic wrap from toilet paper and paper towels, ziplock bags, bubble wrap and plastic “pillows” from shipping boxes. Before recycling at a drop-off location, remove paper receipts from bags and make sure they’re clean and dry.  For drop-off locations and a list of all the plastic film that you can recycle, visit: plasticfilmrecycling.org.

The plastic bags and wrap that you return to stores will be bundled with the shrink and pallet wrap from the “back of house” and sent to a reclaimer. Reclaimers will convert the plastic film into pellets used to make new products. Most of the recycled film plastic is used to make composite lumber and new bags and film products. Trex is one of the largest plastic bag recyclers in the U.S and makes wood-alternative decking and railing. The average 500-square foot Trex deck contains 140,000 recycled plastic bags! Check out our instagram post showing what your plastic bags and wraps become.